Award Success at the Double for Haines Watts Partner 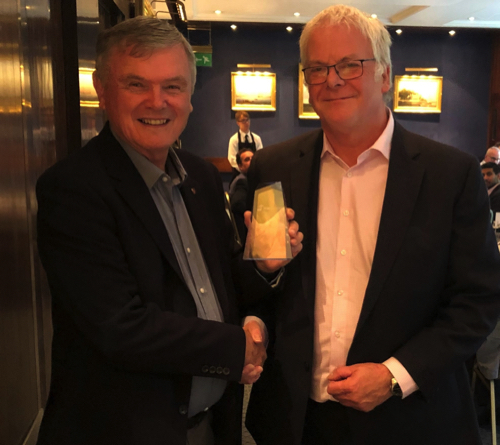 Mr Painter was honoured for 15 years of service to the worldwide training and consultancy network and for being the facilitator who has contributed to one of its core values, Value to Others.

Accepting the awards from Mindshop chairman and founder Dr Chris Mason at the Royal Thames Yacht Club in London, he said that the organisation had influenced his development both as a business coach and as a person.

“I wouldn’t have developed my own business the way I did without them,” said Mr Painter, who merged his business CB Chartered Accountants with Haines Watts in October 2018.

“The excellent support mechanism has enabled me to deal with the difficult decisions that business owners have to make on a daily basis.”

Mr Painter, who was chairman of Herefordshire and Worcestershire Chamber of Commerce from 2010 to 2016, said that he was humbled to have been recognised.

“The work that I do is not something that you expect to receive an award for. Values that I have inherited from my parents – and I hope that have been taken on board by my children – are simple ones that consider the needs of others at the same time as thinking of your own,” he added.

Mindshop’s aim is to help people grow their businesses. With access to a wide range of resources and diagnostic tools, training is delivered via workshops, webinars and online training courses.