Battle of Evesham Festival Set to Become an Annual Event 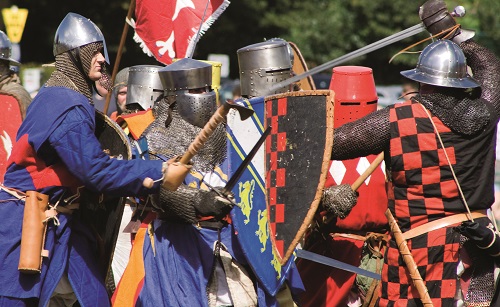 An estimated 10,000 people came to watch over a hundred fully armoured knights and foot-soldiers re-enact the historically important Battle of Evesham last weekend. The event was deemed such a success that the Crown Meadow and Corporation Meadow have been booked-out for the first weekend in August, every year.

Mick Hurst, local businessman and one of the Battle Directors, mentioned “Evesham is often overshadowed by the tourist hotspots of Worcester, Cheltenham and Stratford, and so holding this annual extravaganza of medieval mayhem in the centre of our beautiful town will highlight Evesham as a destination. I know of people who travelled from London and Liverpool just for the Battle of Evesham, so the appeal of this sort of historic event is far reaching. Other Medieval Battle Festivals, such as Tewkesbury and Bosworth have visitors travelling from across Europe and America. As our event grows and becomes a regular fixture, I suspect we will attract fifteen to twenty thousand visitors, great for local businesses and will really put Evesham on the map.”

Fellow Director and Event Organiser, Kate Varvedo, commented that “It looks like that everyone who went to the Battle of Evesham on Saturday and Sunday enjoyed the festival, with all of the traders, re-enactors and helpers enthusing about the positive comments from members of the public. I am already taking stand bookings and sponsorship enquiries for August next year. If budgets allow, we are hoping to have more war-horses, a Falconry demonstration and maybe an authentic 13th century surgeon, performing operations on animated prosthetics, which spurt blood when cut! Each year we will add something new, interesting and educational from the mid-medieval period.”

The third Battle Director, Ashleigh Jayes, who also manages the Almonry Museum, Evesham’s Tourist Information Centre, added “The Battle of Evesham is so historically important in England’s political landscape that it should be celebrated, not only did 5,000 men gave their lives in just one day of the battle, but it resulted in the shaping how parliament runs to this day.” Ashleigh went on “For the success of next year’s festival, we do need the support of the good people of Evesham and the Council. I am already taking names for volunteers who could lend a helping hand during the first weekend in August

Social media has been very active, with hundreds of very positive comments, an example was Matthew H from Northampton, who posted: “I found the event by accident, I was driving from Northampton to Cornwall and stopped for a 30-minute break in Evesham. I left 5 hours later! The participants were very informative and enthusiastic. So many times, I have driven over Simon deMontfort bridge and not realised who he was. Thank you to everybody involved, now we know it happens I think it will become a regular date in our diary.”