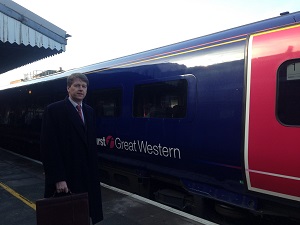 Robin Walker, MP for Worcester and a Vice Chair of the Cotswold Line Promotion Group, has given a cautious welcome to this morning’s announcement from the Department of Transport and First Great Western that negotiations to extend the Great Western Franchise have reached a conclusion with significant service improvements promised.

Having engaged extensively with both parties he has welcomed the inclusion in the deal of many of Worcester’s key priorities including a 2 hour journey time – the key objective of the Fast Track Worcester campaign, which has been backed by all of South Worcestershire’s MPs and the Prime Minister. However he has warned that the three and a half years that it will take to reach that point will see the line continue to lose customers to rival services and he is keeping up the pressure for incremental improvements in the meantime.

There is some great news for the North Cotswolds building on the timetable changes that we are introducing this May, which include an earlier and faster morning peak service arrival for customers from Hereford and Worcester into Paddington, a new morning service from Moreton-in-Marsh to London, two additional direct services from Worcester to Paddington and another direct Paddington to Worcester service (with a two hour journey time).

The franchise, which runs from September 2015 through to at least April 2019, also includes £50 million investment with our partners to improve stations including 2,000 new car park spaces across the network, customer information improvements and improved PA systems.

They have also promised to continue to work in close partnership with Network Rail, the Dept for Transport and local stakeholders on Worcestershire Parkway station, the raising of line speeds and the case for redoubling further sections of the North Cotswolds line.

The statement goes on to say that all trains will be equipped with free wifi, they will be adding 100 more customer-facing colleagues on long-distance trains and the deal also sets up a £2.2 million fund to target station and train service improvements around areas of social need and lower income communities; along with more apprenticeships, a community work placement scheme, and a ‘Get into Railways’ mentoring programme with the ‘Prince’s Trust’.

Commenting on the announcement, Robin said:

“I am delighted that a two hour journey time between Worcester and the capital is now firmly in view and, so to speak, coming down the track, but I wish that it could come sooner. For far too long Worcester has been poorly served by a service that takes two and a half hours to get here from London when similar sized cities, a similar distance away from London get trains in half that time. The Fast Track Worcester campaign was set up to change all this, I was pleased to raise it at Prime Minister’s Questions only a few weeks ago and I am delighted that its primary objective is now in sight. This campaign has been backed by all the local MPs, the Chamber of Commerce, the Worcestershire LEP and the City and County Councils. We know that as long as the Cotswold line cannot compete on journey time, people will continue to travel via Birmingham and Warwick Parkway and this undermines the commercial viability of the line, keeping fares unnecessarily high and discouraging investment, so it is really essential we get on with the job of making it competitive.”

“Along with faster trains we need to see more reliability, better rolling stock and a better in train environment including free wifi. I remember raising this with FGW four years ago and I am pleased that it has been included in today’s announcement. As MP I recognise that the rail service my constituency gets is important, not just for the many constituents who commute or travel on business, but also, crucially for attracting businesses and investors to come and base themselves in Worcester. Worcestershire Parkway will be vital for our County in increasing the use of rail and in making the most of the connections we have, not just with London and the South East but also with the likes of Birmingham and Bristol, I am pleased to see it included and I am very pleased to see that further redoubling of the Cotswold line is being kept on the table.”

“I am also pleased to see this announcement includes investment in people and apprenticeships. As we are seeing greater investment in our railways right now since at any time since the Victorian era, it is clear that there is going to be bright future for people working in the rail industry. I would like to see more jobs and apprenticeships or Worcester people as a result of today’s announcement and I believe that will be possible, whether through direct recruitment by First Great Western or through the investments in our city that better rail connections can bring.”