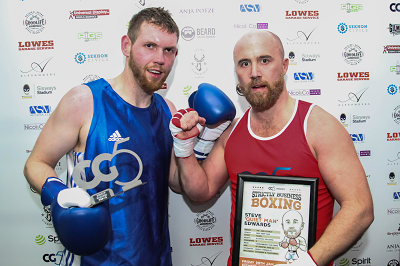 Worcestershire charitable organisation CG5 is looking to award further grants to young sportspeople in 2016 after it raised over £6,000 through a unique business boxing event.

The Strictly Business Boxing evening saw over 500 guests attending from across the county to raise money for the sports-focused non-profit organisation which was founded to promote participation in sport and provide financial backing to disabled athletes and high-potential sportspeople under the age of 21.

Held at Sixways Stadium, the event saw the charity hosting its largest event since it was formed 12 months ago – with 18 fighters taking part in nine well-fought bouts – including CG5 trustee Steve Edwards who drew his fight over three rounds with Matt Caines.

Mr Edwards said: “The boxing event was by far the most ambitious CG5 has held and it was a great night. Although it was expensive to run we still managed to raise thousands of pounds which will go towards supporting sportspeople here in Worcestershire throughout 2016.

“The support we received was phenomenal and there was an incredible atmosphere throughout the whole night. I was also delighted to take part in the boxing and on behalf of us all here at CG5, I would like to thank everyone for their support. Not just those who came along but also our sponsors and partners too. It’s great that everyone continues to take CG5 to their hearts.

“We are actively looking for more young sportspeople to award grants to and would urge people to apply so we can carry on supporting the cream of the county’s talent.”

The boxing evening was CG5’s third large-scale event and since CG5’s formation the trustees have awarded 11 grants to local sportspeople and clubs. The trustees will also be holding two Six Nations events at The Pheasant in Worcester on Saturday 27th February and Saturday 19th March and will be holding its annual golf day on 3rd June.

CG5 was established in March 2015. Aside from Mr Edwards they include Worcestershire businessmen Simon Secretan, Rob March and former Worcester Warriors lock, Craig Gillies. The CG5 name takes its inspiration from the number five Gillies wore during his 11 years at Sixways which culminated in a high-profile testimonial year in 2013/14.

For further information about CG5, readers can visit the website through www.cg5.org.uk.