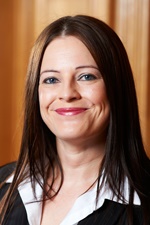 A four-year delay in the promised cap on care costs shows how people need to take action to ensure elderly loved ones are protected from a ‘minefield’ of bureaucracy.

The timely warning has come from expert care lawyer Tracy Ashby, who has spoken out following a number of ‘heartbreaking’ cases she has handled where elderly people have been threatened with being moved by local authorities unless families top up their care home fees – often when there was no need.

Miss Ashby, an associate at Kidderminster law firm mfg Solicitors, says people cannot rely on the government’s promise to cap care costs to £72,000 for the over 65s and young adults with disabilities after it was delayed a second time. It was supposed to have come into effect from April 2016 but is now postponed until 2020.

The delay comes because councils say they are under ‘enormous pressure’ due to budget cuts and an impending rise in the minimum wage for the over 25s.

Ms Ashby said: “Looking after mum and dad can be hugely difficult because of the health problems associated with age, both physical and mental. Time and again we see stories of alleged failings in care homes, cost pressures in local councils and the NHS, all of which lead to older and vulnerable people being pushed from pillar to post. Now the government has kicked the care cost cap into the long grass for another four years.

“It is so important that people receive the right advice on what they should and should not be paying because, for many, the means tested system is so complicated that this can result in service users losing out on things they are entitled to.

“I’ve had very recent cases of families told to pay top up fees when they were not supposed to, sometimes as much as £200 a week.

“In one case an elderly father in his 90s ran out of his own money and was told if his family could not pay he would have to move elsewhere,” she added. “He was distraught. His family could not afford it and he was in tears at the prospect of having to move.

“I am trying to push the message that support for families is available when it all goes wrong. Aside from the courts, there are other channels people can access in what is fast becoming a care minefield.”

The Care Team at mfg Solicitors helps families with advice on fees as well as challenges to local authority and NHS decisions.

Readers looking for further advice on the issue of care fees can contact Miss Ashby by email through tracy.ashby@mfgsolicitors.com or telephone 0845 55 55 321.