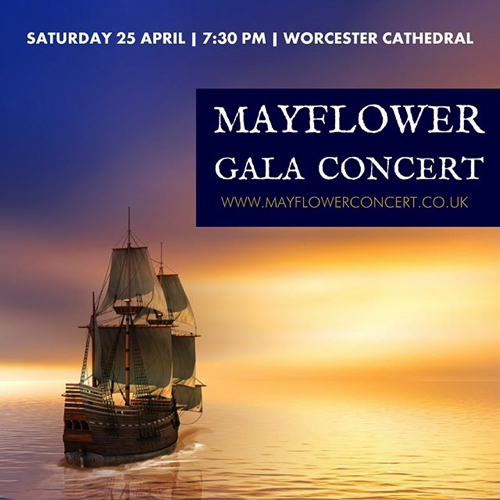 As one of the highpoints of the city’s commemorations to mark the 400th anniversary of the Mayflower’s pioneering voyage to the New World in 1620 and Worcestershire’s strong connection to this momentous and far-reaching event, the Gala Concert will take place in Worcester Cathedral on Saturday 25 April 2020 at 7.30pm.

Worcestershire’s famous Mayflower passenger was pilgrim Edward Winslow who became Governor of Plymouth Colony three times over, was a leading diplomat, politician and peacemaker, and is largely attributed with having established ‘Thanksgiving’.

‘World Premiere’ occasion
As well as audience favourites by Vaughan Williams and Copland, the Gala Concert programme is to include the World Premiere of a specially commissioned choral/orchestral work: Mayflower on The Sea of Time, written by British composerPhilip Sawyers.

Local youngsters to benefit from performance opportunities
Offering young people in Worcestershire access to the finest performance opportunities, the specially-formed Worcestershire Mayflower Chorus – a 200-strong choir of students and teachers – will perform alongside professional musicians, including the English Symphony Orchestra under their conductor Kenneth Woods, and soloists April Fredrick, soprano and David Stout, baritone.

Students from Worcester’s Academy Theatre Arts will join the performance of Copland’sAppalachian Spring in original dance around the cathedral, choreographed by college principal, Helen Leek.

Vibrant young voices
The concert is the culmination of an inspired educational project with Worcestershire secondary schools and colleges under the direction of esteemed choral conductor, Neil Ferris, who is Director of the BBC Symphony Chorus, amongst other eminent choirs, and recognised as one of the country’s leading teachers of choral conducting.

“I am very excited about returning to Worcester to work with incredibly talented secondary school students and their dedicated teachers for what promises to be a rewarding and life-long memorable event”, said Mr Ferris.  “We have commissioned a superb piece from Philip Sawyers, which will make a significant contribution to the cultural events taking place nationally and internationally in this Mayflower 400 year.”

Philip Sawyers added: “My task as a composer was to write a substantial work to commemorate this event and the challenges the Pilgrims faced in the New World. The work is in four parts telling of the persecution and journey, arrival in the New World, survival and community and ‘The Sea of Time’, which includes a reflection of the mystic qualities of the natural world using words by one of America’s most iconic poets, Walt Whitman.  Finally, a celebration and the first ‘Thanksgiving’ brings the work to an affirmative close.”