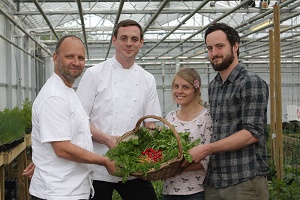 Diners at one of London’s top restaurants are feasting on edible flowers, microveg and microleaves grown by students at Pershore College.

The college has been working with multi-Michelin-starred chef and restaurateur Simon Rogan to supply his London restaurant Fera at Claridge’s with a wide range of high quality edible crops.

The students and staff, led by Commercial Manager John Farmer, currently grow around 20 different varieties of seasonal microveg (such as beetroot, radishes and carrots), leaves (such as chard and kale) and edible flowers for Fera at Claridge’s, which has been awarded a prestigious Michelin star.

Simon, who also runs the two Michelin-starred L’Enclume, has featured on BBC shows Restaurant Wars and the Great British Menu. He visited the college recently with his executive chef, Dan Cox, to see the production, meet the students and also gave a talk about his search for perfect ingredients.

Simon said, “We have our own farm in Cartmel, but were looking for space further south, so when we heard about Pershore College and its heritage, it seemed ideal. It’s a traditional growing area and has amazing soil so it suited us well. As chefs, we’re always searching for more ingredients, more quality, so we want to inspire new growers as much as possible.”

Dan said, “With our growers we demand preciseness, and are always searching for new ideas and produce which is why we started the partnership with Pershore College. As chefs we need great produce but it’s very hard to find.

“We came down, saw the site and were amazed by the facilities at the college. We kept the growing small scale to start off with which but we’re now looking to expand. It’s a fantastic relationship.”

Angela Joyce, Group Principal and CEO of Warwickshire College Group said, “We were delighted to welcome Simon and Dan to the college for their talk about our ‘growing partnership’. To be supplying produce for Fera at Claridge’s is fantastic for the college and especially for our students and staff – it’s a real testament to their horticultural expertise.

“The partnership also enhances our students’ experience, as they get to see the entire production journey of the crops from field to fork and learn about the quality demanded by a Michelin-starred restaurant.”