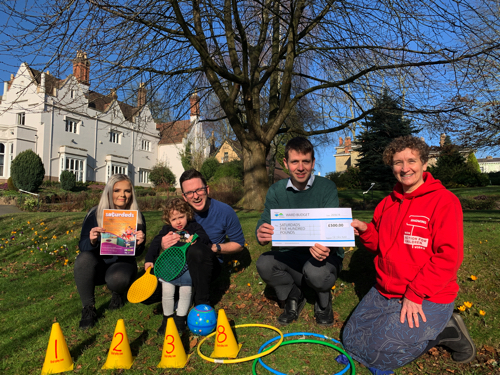 A Malvern Hills district councillor has donated £500 from his council ward budget to a special programme which helps local dads and other male carers spend quality time with their children.

The free SaturDads sessions, which are held at Sport Dyson Perrins, are aimed at dads, grandads, male guardians and carers, to help build bonds with their little ones, as well as other members of the group.

The sessions have been organised by Action for Children with Freedom Leisure and use activities to improve balance, co-ordination and sporting skills, as well as build friendships and provide additional support.

The monthly sessions are held from 3pm to 3.45pm and will be running on the following dates throughout 2019:

Chris Reed, councillor for Dyson Perrins Ward,donated the funds to SaturDads as part of the council’s Ward Budget Scheme.

The scheme provides councillors with £500 per year to assist with local projects that would allow them to become more involved in their communities.

The funding will cover an hourly rate of coaches to lead the sessions and provide new activity equipment, as well as enabling the programme to continue for at least another 6 months.

The SaturDads programme meets the council’s objective to build stronger and healthier communities, both through helping the healthy development of tots and the well-being of dads and carers.

Cllr Chris Reed said:“SaturDads gives an opportunity for dads to spend some quality, active time with their little ones, as well as meeting other dads in a friendly setting”.

Jane Marshall, Community Development Worker at Action for Children, said:“We would like to thank Councillor Chris Reed for supporting the SaturDads group by using his £500 Ward funding, which will enable Action for Children and Freedom Leisure to buy some new equipment and continue to offer further sessions.”