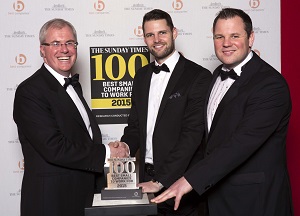 A leading Worcestershire recruitment and training firm has been named in the top 100 small companies to work for across the UK.

eResponse Group, which has branches in Worcester, Redditch and Kidderminster, has been ranked 31st in the prestigious 2015 Sunday Times 100 Best Small Companies survey.

The achievement is a huge accolade for founders and brothers Paul and Joe Alekna, who were nominated by their team of 100 employees. It was the first time eResponse had taken part in the survey and employees’ comments about the company were vital in the judging process

The news comes only four months after eResponse was ranked 45th in the Sunday Times Virgin Fast Track 100 – the national barometer which recognises the country’s top performing private companies and entrepreneurs.

The Alekna brothers, who founded the jobs firm in 2003, were presented with the award by Jonathan Austin, founder and chief executive of Best Companies Ltd at a glittering event at London venue, Battersea Evolution.

Paul Alekna, managing director of eResponse Recruitment, said: “This is a huge achievement for us as it’s been the result of votes by our own staff. That’s why it means so much, and to me, perhaps more than any of the other awards we have won in the past two years.

“We were absolutely overwhelmed to make the Top 100 in the UK. And to be in the top third of that extremely prestigious list of small companies says an awful lot.

“This award is in recognition of the faith our colleagues have shown in us and in our business. It’s not just about Joe and I. It’s about the whole team who are superb and make eResponse such a great place to work.”

The category, which is for companies with between 50 and 250 staff, included a variety of questions which focussed on the quality of leadership, wellbeing, personal development and staff pay and benefits.

Aside from their three offices in Worcestershire, eResponse also has branches and training centres in Coventry, Rugby and Northampton.