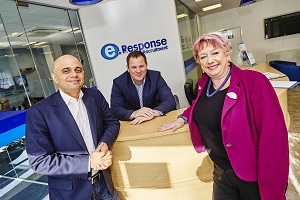 Secretary of State for Culture Sajid Javid has visited one of the region’s best employers while out campaigning.

The Conservative, trying to retain his seat in Bromsgrove at the General Election, accompanied Redditch incumbent Karen Lumley on a tour of the Redditch headquarters of recruitment and training firm, eResponse.

The visit to eResponse came only weeks after it was confirmed that the firm, which provides job opportunities and expert training, has been ranked 31st in the prestigious 2015 Sunday Times Best Small Companies survey.

Mr Javid and Mrs Lumley were given a tour of the offices and its training centre by co-founder and operations director, Joe Alekna.

Mr Alekna, eResponse operations director, said: “It was fantastic to welcome the Secretary of State to our Redditch headquarters.

“He went away very impressed with how we provide tailored training and support across a range of business sectors, all of which is crucial if workers are to have the skills needed to take the new jobs which are being created across the region.”

Mrs Lumley added: “Our long term economic plan is working and jobs are being created at a rate of 1,000 per day. Firms like eResponse are making sure that there are workers trained and ready to take those jobs, giving more people the security of a wage and giving businesses the skilled staff they need to succeed.”

Founded by Alekna and his brother Paul in 2003, the company was nominated by their team of 100 employees in the recent Sunday Times survey. It was the first time eResponse had taken part.