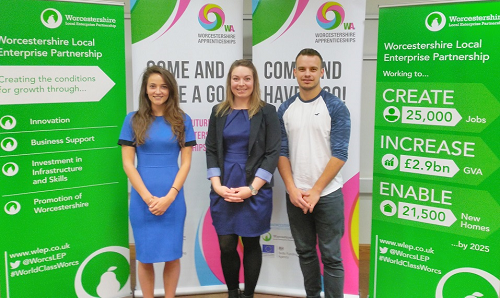 The three previous winners of Worcestershire’s Apprentice of the Year awards are encouraging local apprentices to enter this year’s Worcestershire Apprenticeship Awards 2017, with the 30 June deadline now fast approaching.

Pippa Dressler-Pearson, Project Technician at Southco, said: “Winning Apprentice of the Year 2016 has opened my eyes in so many ways. This kind of opportunity does not come round that often. So, I decided that I wanted to try and make a difference for future apprentices, their parents, and teachers. I have conducted interviews with influential people and companies throughout Worcestershire, to de-bunk the myths around apprenticeships. This has proven very successful with the feedback I receive from each blog I write. I’ve also been offered a full time position as Project Technician at Southco, and gone on to win the prestigious SEMTA (Science, Engineering, Manufacturing Technologies Alliance) Best of British Engineering Award.”

Victoria Rawlings, Relationship Manager at Titania, said: “Since winning Worcestershire’s Apprentice of the Year 2015, a lot has changed. Whilst at TRS Claims, I successfully obtained some substantial contracts with the UK’s largest insurers which set the benchmark for the gadget insurance market. This hard work had me recognised as one of The Rising Stars at The Claims Awards and Young Woman in Business for Wonderful Worcestershire Women. Wanting a new challenge, I recently joined Cyber Security Company Titania, who was announced as a 2017 recipient of the Queen’s Award for Innovation, the highest official award that can be bestowed on a UK business.”

Ryan Shemwell, UK Operations Manager at Green Lighting Ltd, said: “Life is busy for me since I won Worcestershire Apprentice of the Year 2014, educationally I have completed a HND in Business Management at Birmingham City University and just commenced a Higher Apprenticeship in Management with Heart of Worcestershire College. I have remained at Green Lighting and have been promoted to UK Operations Manager. We have continued to win awards achieving ‘Highly Commended’ at the regionally national apprenticeships, a Queens’s award for innovation, plus I was honoured to be invited to St James Palace as part of the Princess Royal inaugural training awards. Winning has assisted me in forging a successful career.”

The Worcestershire Apprenticeship Awards, now in its fourth year, has consistently attracted an audience of over 300 attendees, with hosts including Nick Hewer, Steph McGovern and Tim Campbell MBE.

The 2017 Worcestershire Apprenticeship Awards will recognise excellence in 12 categories:

Sponsorship opportunities are available and tables are on sale for the awards which are being hosted by Worcestershire LEP and Worcestershire County Council, on 16 November 2017 at West Midland Safari Park.