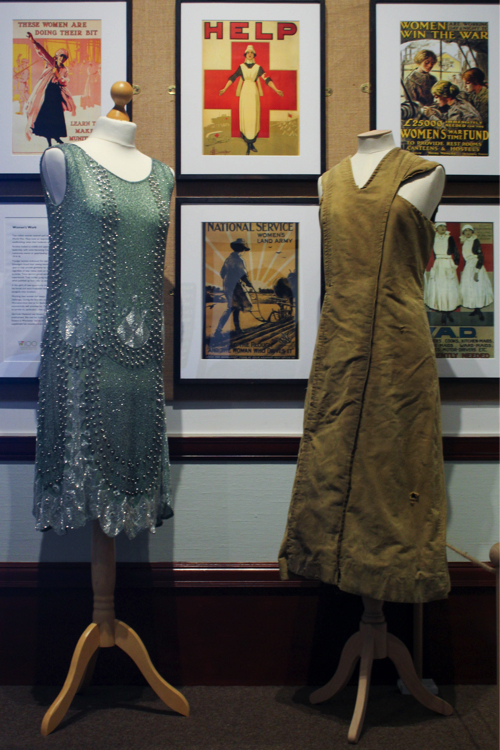 Fashioning Peace: Life and Liberty after the Great Waropens at Worcestershire County Museum at Hartlebury Castle on Saturday 2 March and runs throughout 2019.

Part of the Worcestershire World War One Hundredprogrammethis new exhibition explores how the changes brought about through the Great War were reflected in clothing and fashion from 1918 through to the roaring twenties.

The Great War changed everything. From science and medicine to art and culture to the very core of society and its values, its effects were far reaching and dramatic. The exhibition starts with stories of scientific, medical and cultural changes brought about by the war – including a wonderful model of an aeroplane and an unsettling gas mask – before moving on to displays of costume which may seem an unlikely conduit for demonstrating change, but in fact exemplify social, economic and technological advances in a succinct and beautifully visual way.

The struggle for women’s suffrage began long before the Great War, but it was the valiant efforts of the women and girls during the conflict that is widely regarded as being the catalyst for women gaining the right to vote in 1918.  Echoing these developments, the restrictive crinoline and bustle, tailored seams and intricate boning of female costume pre-war period disappeared forever. A typical 1920s dress had minimal shaping, no tailoring and hems at knee level: fashions for women were unlike anything that had gone before. It was a revolution in dress and paved the way for the modern age.

Rachel Robinson, Manager of the County Museum at Hartlebury Castle said:“Throughout history, clothing has often reflected a person’s social and economic status and post-war fashion reflected a new and liberated mood. This exhibition is about surviving and thriving after the Great War and is reflected in the functionality and fun of the costumes on display today.

“We are delighted to be able to showcase a number of costumes from our outstanding collection and look forward to welcoming visitors to enjoy this new exhibition.”

The costumes on show are taken from the County Museum’s Tickenhill collection which contains over 2000 items all reflecting the changing fashions and values of the last three centuries.

On Saturday 2 March, the official opening day for the exhibition, visitors can take a tour of the costume store as well as joining in with craft activities for children including making flapper headdresses and bow-ties.

On Thursday 21 March, 1pm – 2pm join a Curator for a talk: An Introduction to the Fashioning Peace exhibition. On Thursday 16 May, 1pm – 2pm enjoy a general talk about the costume collection including a tour of the costume store. Talks can be booked by calling 01299 250416.

Whilst visiting the new exhibition visitors can also enjoy the historic house that was home to the Bishops of Worcester for a thousand years, touring grand state rooms, exploring the grounds and gardens and enjoying more of the County Museum’s fascinating collections. Hartlebury Castle has recently been awarded the accolade of Hidden Gem by Visit England.

Hartlebury Castle is open Tuesday to Friday, 10am – 5pm and Saturday, Sunday and Bank Holidays, 11am – 5pm. For information on admission prices visit: https://hartleburycastle.com/