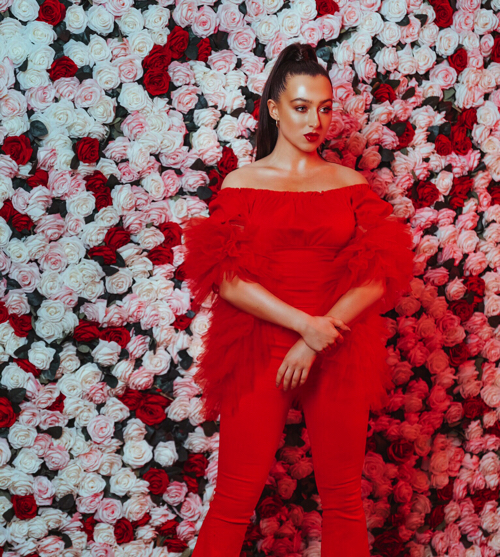 Grace Rhodes is a young Versatile Vocalist and Performer who was born and raised in Worcestershire, UK.

She is signed by Uprise Records, founded by Ositadimma “Osi” Umenyiora a British-born sports pundit and former American Football defensive end who played in the National Football League (NFL).

Before being signed to Uprise Records, Grace attended LAINE Theatre Arts, known as one of the Top Performing Art Schools in the UK where she was one of 50 applicants to be accepted in her year out of thousands.

She undertook a three-year intense diploma in Musical Theatre and Dance, whilst working as a professional dancer globally for various dance companies where she made appearances on the BBC generation game, to performing at the Samsung forum in Rome in 2017 and partaking in the BBC International Dance Day in Birmingham.

Grace’s natural talent and gift as a vocalist, dancer and performer were picked up from a young age where she began her ballet training at the age of three years old. She had private tuition for singing which allowed her to enhance her ability to sing within different genres of classical, jazz, musical theatre, pop alongside enhancing her acting and dance skills.

At the age of 16 she attended Birmingham Ormiston Academy (BOA) who specialised in the Creative and Performing Arts, partnered with the Brit School (college) where she studied dance.

Whilst at BOA, Grace was selected to perform at the Free Radio Live (concert) where she was the opening dance act before then passing over the stage to Ed Sheeran. The following year Grace was selected from an audition out of 1,000 students plus and was one of eight to sing solo at the Birmingham LG Arena where she blew the judges away with her strong vocals with the ability to connect with her music, emotions of the song and her audience.

Whilst in her second year at LAINE Theatre Arts she was spotted by a talent scout in the USA, where founder Ositadimma “Osi” Umenyiora and his partner Layla Lopes, former Miss Universe decided to sign Grace to their label Uprise record label.

Grace released her first single and music video ‘MeToo’ on September 11th, 2019 which focuses on supporting and raising awareness further for the #MeToo movement for Women, Men and Children.

The music video was shot in LA with established Producers, Directors, Dancers in the Music Industry and was released on the Kondzilla Music Platform who have over 51.9 million subscribers.

Following on from her first single, Grace will be releasing more of her music this upcoming year, 2019