Get involved in National Apprenticeship Week: 9 March to Friday 13 March 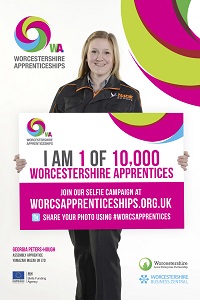 Worcestershire organisations are being encouraged to get involved during National Apprenticeship Week.

The national campaign, which runs from Monday 9 March until Friday 13 March, is being marked locally with the launching of a brand new website www.WorcsApprenticeships.org.uk

The new website provides a forum for employers to post any vacancies, job seekers to find the apprenticeship programme which is right for them as well as a host of other information including that for training providers.

To mark the National campaign, apprentices, organisations that offer apprenticeship programmes and those who support the creation of apprenticeship opportunities are being asked to join the Twitter campaign.  Materials can be downloaded from the new website so that as well as the hashtag #WorcsApprentices, those taking part can photograph themselves holding up a sign with one of the following messages alongside the new web address:

Gary Woodman, Executive Director at Worcestershire Local Enterprise Partnership, said: “This campaign is a great way for young people and businesses to celebrate their apprenticeship programmes and be recognised for the work they are doing in developing the skills of the young workforce.

“We also hope that organisations who don’t currently offer apprenticeship places, consider doing to. You can visit the website which provides a wealth of information and we may see your apprentices recognised at this year’s Worcestershire Apprenticeship Awards which will take place on 12 November 2015.”

Businesses also have until the end of this week, 15 March 2015, to complete the apprenticeship surveys on the Worcestershire LEP’s website www.wlep.co.uk or via a link on the new Worcestershire Apprenticeship website. A number of businesses have already taken the opportunity to share their thoughts and experiences and the surveys are open until 15 March 2015 to allow others to do so.