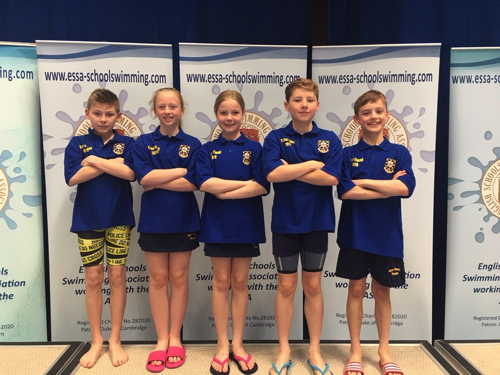 The medley relay team had pre-qualified for the Sheffield gala earlier in the year with a qualifying time of 1.13. In their heat, Jacob Cutler, Josh Round, Harry Chandler and Flora Middleton smashed that time, touching the wall in 1.05.6 and qualifying for the ‘A final’ in 2nd position. The fab four stepped up again for the final, demonstrating their swimming prowess to finish in 1st place with a time of 1.05.00, becoming English Champions!

Swimming teacher, Mrs Nicola Bainbridge, commented: “They have worked so hard as a team since March, improving massively over a short period, which really shone through in Sheffield. Well done everyone!”

The team including 10-year old Chloe Manning had also pre-qualified for the freestyle relay with, with a time of 1.03, and were ranked 8th as they took to the water in Sheffield. In an amazingly quick heat they improved their time to 57.99, going into the ‘A’ final in 3rd place position. With less than a second between the top 6 teams the team swam fiercely, narrowly missing out on a bronze medal by a mere 1/100th of a second!