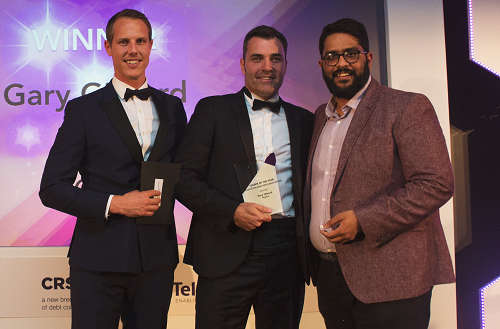 The Chief Executive of a Worcestershire-based business outsourcing firm has been recognised for his leadership and for overseeing the company’s growing foothold in the utilities sector.

Gary Gilburd, CEO of Redditch headquartered Sigma Financial Group, was awarded the Leader of the Year title at the 2018 Utilities & Telecoms Awards for his work in developing and expanding the company which he co-founded in 2011.

Mr Gilburd has overseen seven years of continued growth as Sigma has developed into a major player in the utilities sector – offering contact centre and credit management services to UK energy firms and those within the retail and telecommunications industries.

The business, which has grown to employ over 500 people across its Redditch and Birmingham contact centres, was acquired by South African-based Digicall Group in 2016. It continues to be led by Mr Gilburd and co-founder, chief operating officer, Mike Harfield.

Gary said: “To be recognised by the industry is a really special moment, not just for me, but for everyone at Sigma who work so hard to make the business the success that it is.

“We’ve gone through massive change and positive growth in the past seven years and are really well placed within a number of sectors as we approach our tenth anniversary in 2021. These types of awards are brilliant as it gives us a chance to look back and see what we’re achieved.”

The call centre services Sigma provides for ScottishPower were also commended at the awards.

Mr Gilburd has spent over 20 years in the outsourcing industry and is a regular commentator on the challenges and opportunities it faces.

His recognition follows this summer’s formation of Sigma’s new consultancy division which is being led by the company’s new director of energy and water services, Ian Parry.