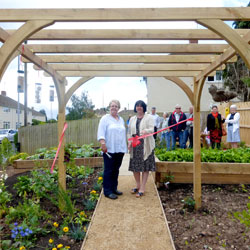 Worcestershire and Herefordshire charity Onside, which supports disadvantaged people, has recognised important community work in Droitwich. ‘The Lesley McKay Stronger Communities Award’ was won by Liz Pettican for her ‘extraordinary efforts’ in transforming a derelict plot into a new garden. “Liz led a team of dedicated volunteers in regenerating land which had been overgrown and neglected for over twenty years,” said Kate Harvey, Chief Executive at Onside. “It is a remarkable thing to have done for the community and the award is well deserved. They have done a fantastic job, and the garden is beautiful.”

The award, named in memory of Onside Lesley McKay who worked with Onside for 15 years, was movingly presented by Lesley’s daughter Helen at an award ceremony at the Bank House Hotel in Bransford. The ceremony was a key part of an innovative and unusual charity event, ‘The Secret Elephant Show’, a ‘theatrical dinner’, which featured performances written and performed by University of Worcester drama students.

‘We are proud to support this initiative,” continued Kate. “We are committed to helping to promote stronger communities and it is important to support projects such as this award winning effort.”

Onside has been developing its range of services in Worcestershire since 1993, and is ‘passionate in the belief that every human being deserves to be treated in a respectful and fair manner’. Now with over 250 staff and active volunteers, Onside works to ‘improve the lives of disadvantaged and vulnerable adults’, helping over 3,000 last year. For more information about Onside’s services, visit www.onside-advocacy.org.uk