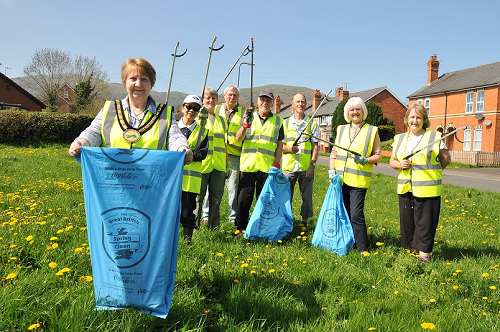 A pair of shoes, a cone and disposable gloves were among the items plucked from the district’s streets as part of this year’s Great British Spring Clean.

Almost 30 bags of rubbish were filled with litter dropped on Madresfield Road in Pickersleigh and Worcester Road in Newland.

Rev Lynne Sparkes from St Mary’s Church also joined in the Pickersleigh litter pick before treating those involved to free tea and coffee. The Swan Inn in Newland also rewarded those involved with a free drink and biscuits.

The picks formed part of this year’s Great British Spring Clean, which was due to take place in March but was delayed due to snow.

Run by Keep Britain Tidy, the annual campaign aims to bring people together to clear up the litter that blights towns and villages across the country.

Cllr Chris O’Donnell, Chairman of Malvern Hills District Council who took part in the Pickersleigh litter pick, said: “A big thank you to all our litter heroes who took part. We are fortunate to live in a beautiful part of the country, but it’s blighted by selfish people who thoughtlessly drop their rubbish. Our message is simple – don’t drop it, bin it.”