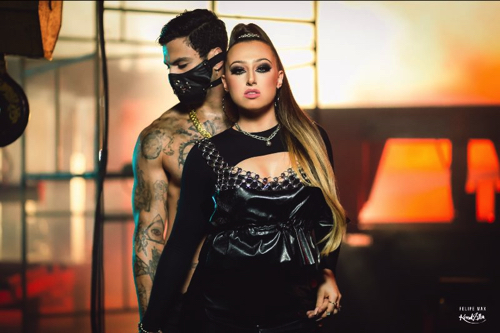 Grace who is a BBC Introducing Artist and a breath of fresh air to the Industry is defiantly a one to watch and  amassed nearly 100k views within 12 hours including support from the Industry.

The release of this second single comes during a time of pandemic in the world, the decision to release the single is to uplift spirits and provide new music to the world.

The song is upbeat, sexy and fun with a predominant funk beat which is the current music genre Grace is focusing on with her label and Kondzilla. There are added flavours of pop and commercial to be able to reach a wider audience sharing a fresh sound to listeners.

“Dangerous is more than just another upbeat song, it is based on the idea of a strong, sexy female displaying her attraction towards a Male she is interested in,” says Grace.

The song and video for ‘Dangerous’ portrays Grace playing a woman that knows herself, her worth, what she wants and isn’t afraid to get it.

Dangerous was produced by Zeeko, an award-winning music producer, engineer & songwriter from London. He has produced and written songs with Platinum-selling artists such as Yxng Bane, Stefflon Don, WSTRN & Mostack.

Matthew Bento was also involved as a songwriter for the track Dangerous, who has already worked with a portfolio of clients around the world including G-Eazy, Dua Lipa and Danny Seth just to name a few.

Grace’s EP is due for release shortly sharing her strong and talented vocals and versatility.  Last year she was named BBC Introducing Artist in Hereford and Worcester, her home town and has recently performed a BBC Live Session.

Andrew Marston, BBC Presenter for Hereford and Worcester said “Catchy tracks and pin-drop performances from one of the most dedicated musicians around”Grace also wowed at BBC Radio London when making an appearance on The Scene with Claira Hermet.