Local Boy Saddling Up for Hospice 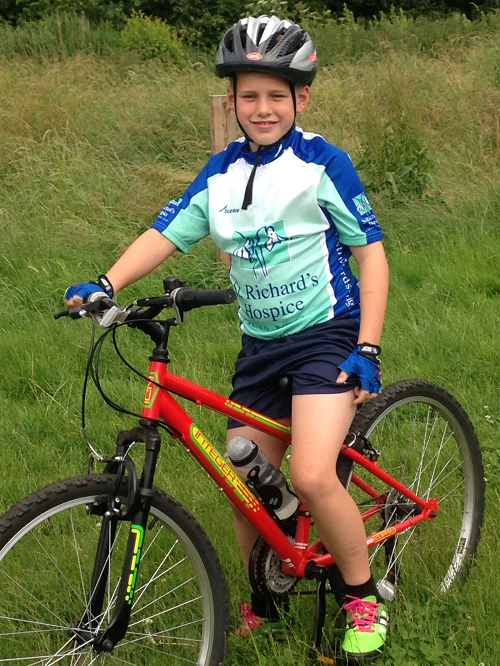 A Worcester school boy will be getting on his bike for hospice care next month.

Jay Ingram, aged 10 and from Perdiswell, will be taking part in a sponsored 10 mile cycling challenge around Worcester Racecourse on Sunday 1 July.

This is the fourth year running that Jay has taken part in fundraising for St Richard’s Hospice.

Jay’s support of the hospice came about following the care his aunt Mel Baker received before her death in 2014.

Jay’s sponsored bike ride this summer will be witnessed by family and friends.

Jay said : “I really miss my Auntie Mel and it’s things like this that make me feel closer to her.  I hope to raise as much money as I can so St Richard’s can look after other people’s family members who are ill.”

Sabrina Ingram, Jay’s mum, said : “We are so proud of Jay.  He has shown such dedication and commitment over the last four years with his fundraising activities.  He really is an inspiration.  He continues to show us all that his aunt’s memory lives on within our family and the wider community.”

Jodi Brandwood, Fundraiser at St Richard’s Hospice said : “Jay’s enthusiasm is absolutely fabulous and we are so grateful for his ongoing support.  It means such a lot to us and we are truly humbled as he is so young.  We wish him the very best of luck on the day!”

St Richard’s Hospice provides free specialist palliative and end of life care for patients living with life-limiting illnesses and supports their loved ones. Each year the hospice team supports more than 3,300 patients, family members and bereaved people in Worcestershire.

The hospice strives to provide the best medical, practical, emotional and social support they can to help people live life to the fullest, as independently as they can, for as long as they can. They care for people with a range of illnesses including heart failure, Parkinson’s, and motor neurone disease as well as cancer.

St Richard’s is an independent charity and relies on donations for three quarters of its annual £8.8m income with the remainder from the NHS.

St Richard’s has launched the Build 2020 Appeal which aims to raise the final £1.4m needed to build a bigger hospice, enabling more patients and families to be cared for in Worcestershire.  The total cost for expanding and redeveloping the existing building in Wildwood Drive, Worcester, is £5.3m.