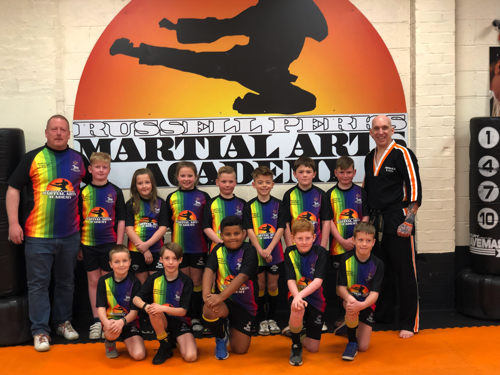 Kidderminster Carolians under 9’s who play and train at Marlpool Lane Kidderminster, have been kitted out with a new tour rugby shirt by Russell Perks Martial Arts Academy.

The team have 25 signed players with a squad of 17 due to represent the club at the International festival Rugby Rocks in Biddeford in May.

Russell Perks, of Russell Perks Martial Arts Academy said: “There are a lot of synergies between martial arts and rugby. The Carolians follow the England Rugby TREDS framework incorporating teamwork, respect, enjoyment, discipline and sportsmanship which are all important to me and the academy too.“When the club approached me about the sponsorship with the concept and design of the ‘rugby for all’ match shirt, I was sold, it really makes the team look smart when they are representing the club and has a strong message that anyone can be involved and play rugby. We are delighted to be involved.”

Paul Watkins , manager of Kidderminster  Carolians under 9 said: “We are extremely grateful to Russell and his team for supplying the kits for the children and for supporting youth rugby here in Wyre Forest. The kids absolutely love them and look the part ready for their tour.

“We hope the tour helps the children develop their social skills, build friendships as well as broadening and expanding their life and rugby horizons by playing new opposition in a new environment.

“I would also like to take this opportunity to thank our coaches, tour committee and parents who are all vital cogs in our club and without them there would be no team for the children.”

Led by Mr Watkins and the coaching team the Carolians  have made impressive progress so far in what is their debut season in contact rugby.