Local Promoters Partner with Jägermeister To Welcome Bristol’s No Violet 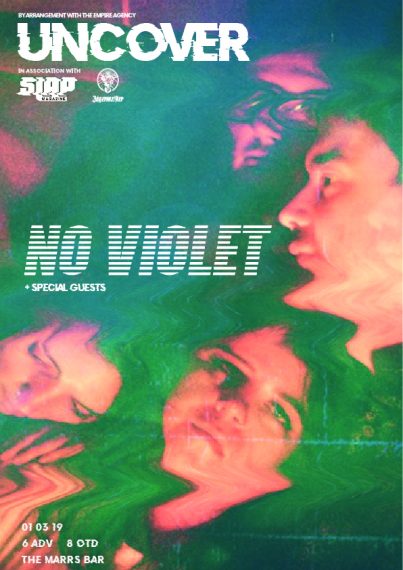 Following on from recent interviews with Steve Lamacq on BBC Radio 6 and a hugely successful Independent Venue Week gig, local promoters Uncover are partnering with Jägermeister to welcome Bristol based grunge/alt rock band No Violet to The Marrs Bar, Worcester, on March 1st.

The four-piece are known for their enthralling performances and idiosyncratic blend of fuzz-infused grunge rock and semi-contorted math rock that echoes the early work of the Pixies.

The release of the single ‘Be My Friend’ in June saw them feature regularly on BBC Introducing, earning them a positive recommendation from BBC Radio 6’s Tom Robinson before the release of their debut EP, ‘Faces’, in September.

Joining them on the thrilling bill is local legends The Jericho Racks who boast a fuzzed-out, garage rock sound that’s packed with emotion and pure grit that nods back to great blues masters.

They’ll be preceded by The Space, a young five-piece based in Kidderminster and opening will be Hipflask Virgins, Hipflask Virgins, a groovy rock two-piece from Worcester who have together amassed years of gigging experience.

Uncover have recently celebrated their second birthday after putting on regular gigs in the Worcester city centre for two years, hosting a BBC Fringe event for BBC’s Biggest Weekend and forming partnerships with the likes of Jägermeister.

Later in the month, Uncover will also be welcoming 80’s influenced, rising star of pop Rumrunner to the stage at Annie’s at the Courtyard in Worcester on March 29th. The contemporary artist will be joined by Slow Tapes, Worcester favourite Poppy WS and Chloe Mogg.

Tickets for No Violet are £6 advance and £8 on the door.

Tickets for Runrummer are £4 advance and £6 on the door.

More information and tickets for both shows are available online now via http://www.uncover-music.co.uk/events/