Monday Night Club in Worcester recognised by the Prime Minister 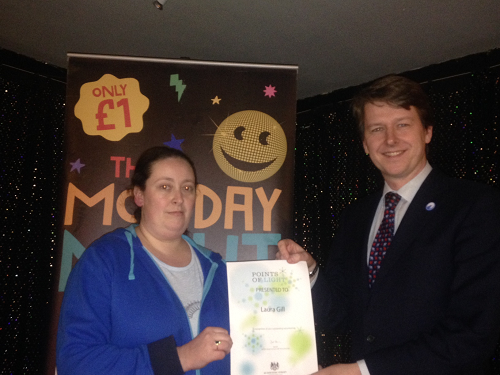 Robin Walker, MP for Worcester, was delighted to honour Laura Gill last night; an incredible young woman from Worcester whom he welcomed in Westminster last year for the Speak Easy Now’s ‘take-over’ day, as she has been awarded a Point of Light award by the Prime Minister.

Laura, who has learning difficulties herself, set up a weekly social club for over 150 adults with learning difficulties and autism to have fun in a safe place. The Monday Night Club provides a regular social occasion for young people to give them access to exciting activities and opportunities.  She is the latest recipient of a Point of Light award; which recognises outstanding individual volunteers, people who are making a change in their community and inspiring others. Each day, someone, somewhere in the country is selected to receive the award to celebrate their remarkable achievements.

A MENCAP young ambassador, Laura started the club at the Barbourne Ex-Servicemen’s Club as part of a new project set up by Mencap and ENABLE Scotland, which has received more than £7million in funding from the Co-operative Group’s Charity of the Year partnership. The Inspire Me project aims to provide young people aged 14-25 with learning difficulties the opportunity to build their confidence and learn new life skills through practical activities, training and community learning.

One of Laura’s successes with the Monday Night Club, which is now a registered charity, involved fundraising to take 37 people on a two-day trip to London.  Laura planned an event at the Shaw Theatre in London to show a film the club had made about their work to an invited audience, including The Secretary of State for Culture Media and Sport, Rt Hon, Maria Miller MP, and Richard Bacon MP.

Laura is also Chair of Worcestershire’s People Parliament, a group that speak up on issues that affect people with learning difficulties in the country.  Robin has attended a number of their meetings at County Hall as well a number of their election hustings at the Hive last year.

“Laura is a fantastic example of how young women in Worcester are helping to support their peers and community. I thoroughly enjoyed her time in Westminster when she came to see me for ‘take over day’ through Worcester’s Speak Easy Now group. Speak Easy Now called on me and other colleagues by campaigning for election manifestos to be made in easy read format which were later produced, and I know this was an important issue for Laura.

“Both Laura and her family have done an incredible job in volunteering and supporting people with learning difficulties in Worcester, and I have been impressed by Laura’s passion for empowering young people, and the energy for which she has pursued so many good causes.”

“The Monday night club is a great example of a valuable social network for young people otherwise at risk of isolation and I am thrilled that the Prime Minister’s initiative has recognised this.  It’s been a privilege to work with Laura: whether it was through ‘take over day’, People’s Parliament, Monday Night club or her campaigning for local groups.”

“Laura continues to do a remarkable job of representing people with learning difficulties and showing that they can overcome the challenges they face. Points of Lights is a great scheme to highlight the enormous contribution by volunteers in our communities and Laura is a worthy winner.”