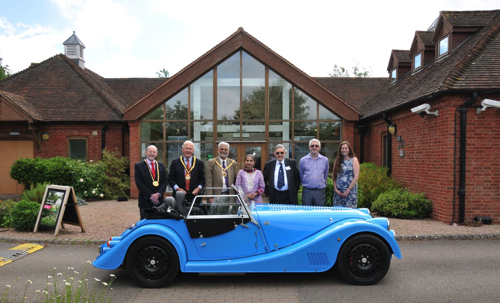 Around 20 Morgan cars took to the roads across Worcestershire to celebrate the re-launch of the historic Elgar Route.

The route, which was re-launched on Thursday (30 March) is a 37-mile journey around the Malverns and Worcestershire which follows in the footsteps of the legendary composer, Sir Edward Elgar.

People can drive, cycle and take in walks on the newly sign-posted route and see landmarks which inspired Worcestershire’s most famous son to create his greatest works.

Key attractions include The Firs: Elgar’s Birthplace in Lower Broadheath, Great Malvern, the Malvern Hills, the riverside town of Upton-upon-Severn and the historic city of Worcester.

Working with the Morgan Motor Factory and the Morgan Sports Car Club, the re-launch event saw Morgan cars rally along the route.

Starting at Malvern College, the cars also stopped at the Great Malvern Priory, Black Hill Car Park, Peachfield Common and Cathedral Square, much to the excitement of onlookers.

After the rally, representatives from the Elgar Society, the Morgan Sports Car Club and other dignitaries gathered at The Firs: Elgar’s Birthplace, along with Cllr Dean Clarke, Chairman of Malvern Hills District Council, who said a few words.

Guests enjoyed a musical performance by Michael Jones, a teacher at The Elgar School of Music based in Worcester, and a new exhibition by Anthony Bridge which combines the local artist’s passion for cycling and the Elgar Route.

Refreshed and signposted by Malvern Hills District Council, Worcester City Council and Worcestershire County Council, the route was re-launched in time for Elgar’s birthday on 2 June and as part of the 2019 Elgar Festival.

Victoria Carman, Visitor Economy Officer at Malvern Hills District Council, said:“We are so pleased to be involved in giving the new and improved Elgar Route the re-launch Sir Edward Elgar so rightfully deserves. Heads were  turning when the Morgan rally toured the route and the Morgan car owners were delighted to help with some great photo opportunities along the way. We want to extend our thanks to everyone involved”.

Toby Blythe, Head of Marketing at Morgan Motor Company, said:“The re-launch of the Elgar Route is brilliant news for the county, not only will it allow local residents to discover the origins of Elgar, it will also help to encourage more tourism to the area. The Morgan Factory and Visitors Centre is conveniently located for people looking to take part in the route. What better way to see the beautiful surroundings of Worcestershire, discovering about Elgar, than in a Morgan factory hire car? Congratulations to MHDC for re-launching the route, we hope everyone who drives it enjoys!”.