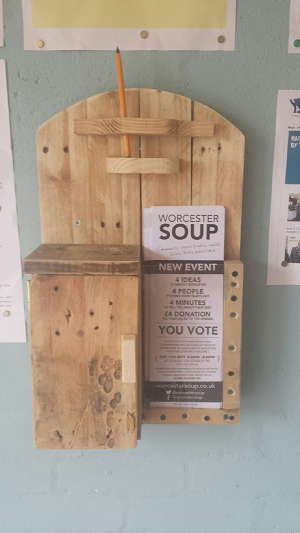 Inspired by the BBC news article “Can soup change the world?” and the amazing work of founders Detroit Soup in the US, a new micro-funding dinner event is launching in Worcester on 13th September 2015.

Worcester is joining a fast growing network of other “Soups” in the UK. At the beginning of April there were only a few events happening in towns and cities in the UK. There are now over 20 regular events.

Worcester Soup is like the popular TV programme Dragons Den but run by Worcester people for the benefit of the Worcester community. Instead of entrepreneurs deciding the winner, attendees vote on which idea or project wins the money raised from the door entry money.

Those attending Worcester Soup pay a voluntary donation of a minimum of £4 entry, bring food to share, get soup and a vote. 4 people selected before the event pitch their idea for 4 minutes. There are 4 questions from the audience after each pitch. Depending on the number of people attending, the winner could be walking away with hundreds of pounds to help their project’s development.

Worcester Soup founder Bruce Simpson says the real value of the event comes from the encouragement it offers those wanting to make a difference locally. “We can see from the success of other Soups, across the world and in the UK, that creating a safe place for a diverse group of people to share ideas and support each other for the benefit of the community can have wonderful results . . . it will be a really fun event open to all. There will also be a featured artist and musician at each event, and plenty of opportunity to share ideas to benefit Worcester.”

The first Worcester Soup is being held at S.T.A.R.S on Stanley Road on Sunday 13th September 2015 from 5.30pm–8.30pm and is open to everyone. For more information visit worcestersoup.co.uk, @worcestersoup on Twitter or worcestersoup on Facebook.

Worcester Soup is now accepting proposals for those wanting to pitch on the night. The closing date for proposals is 13th August. Projects can be submitted via the website or via ideas boxes in various locations across the city.