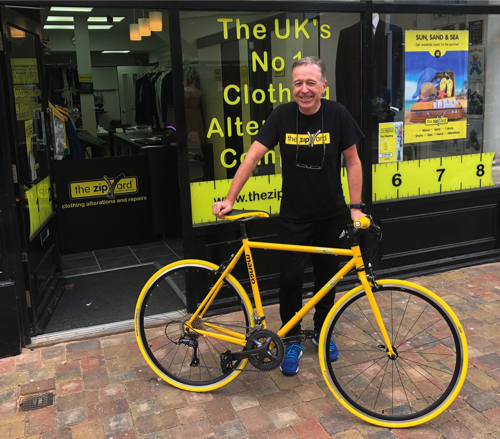 Worcester repair and alterations store The Zip Yard is getting on its bike to launch a new delivery service.

Running throughout July and August, the pilot scheme covers the W1 to W5 postcodes and all proceeds will be donated to Worcester Community Trust.

The scheme is the brainchild of store owner Paul Meredith, a keen cyclist who clocks up an average of 200 miles a week.

Mr Meredith said: “Repairing and altering clothes extends their life and prevents them being sent to landfill so it makes perfect sense to help the planet further by cutting down on the number of short car journeys we make to deliver items to customers or for them to collect from us.”

Deliveries, which will be made on the store’s new branded bike, cost £3.50 and will help to support Worcester Community Trust’s health and wellbeing initiatives.

“As someone who cycles every day, I know how much better I feel mentally and physically from taking regular exercise. That’s why we have decided to support WCT as physical exercise has a positive impact on an individual’s wellbeing,” added Mr Meredith.

Founded in 2005, The Zip Yard is the UK’s fastest growing garment alteration franchise. Based in The Shambles, the Worcester store opened in 2016.