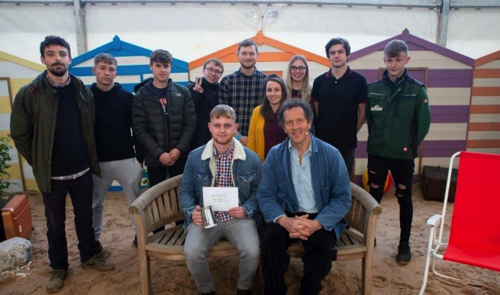 A horticulture apprentice training at Pershore College has been named as the Midland Regional Growers (MRG) Apprentice of the Year.

Tom Everard, who is currently employed at the Worcestershire-based plant company Bransford Webbs, was presented with the award by the BBC television gardening presenter, Monty Don, during last month’s RHS Malvern Spring Show.

Currently in the second year of his apprenticeship scheme, the 20-year old from Clifton-upon-Teme was also given a trophy and and £100 in prize money. He said: “I have thoroughly enjoyed the time I have spent at Pershore College and have found it extremely useful relating the knowledge I have learnt there to various  tasks I have completed at work.”

Mark Diggines, MRG training assessor at Pershore College, said: “Tom has embraced the world of plant production and fully deserves his award of Midland Regional Growers’ Apprentice of the Year 2019. He has taken every challenge in his stride and demonstrated an ability well beyond his experience.

“During his apprenticeship, Tom has won a trip to see the plant nurseries in Holland, a day at the RHS Chelsea Flower Show and has been promoted to supervisor. He is a credit to both Bransford Webbs and Pershore College.”

Tom joined Bransford Webbs in September 2017, on the two-year apprenticeship scheme, working towards a Level 2 work-based learning Diploma in Production Horticulture. He was promoted to the role of area team leader in August 2018 and is now responsible for the growing and dispatch of crops within his area.

His apprenticeship mentor at Bransford Webbs, Karl O’Neill, said: “We are very proud of Tom’s achievements. He has worked very hard during his apprenticeship and is a worthy winner of this award. We are positive he has a bright future with us here.”

Midland Regional Growers are a group of independent ornamental horticultural nurseries and growers in and around the Warwickshire, Worcestershire and Herefordshire areas. Each year its cohort of commercial production horticulture apprentices attend the show for the award ceremony.