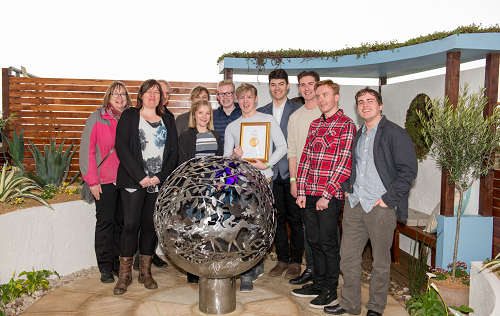 Horticulture students from Pershore College have scooped a prestigious gold medal for their spectacular urban garden in the Young Gardeners of the Year Awards 2018 at the Ascot Spring Garden Show.

This annual competition, now in its eighth year, is organised by TV gardener David Domoney in association with The Prince’s Foundation for Building Community.  The awards celebrate the best of young British talent in garden design and build and gives students the unique opportunity to create a show-stopping, sustainable garden seen by thousands of visitors at the show.

Each of the six competing colleges was given a 5m x 4.5m plot to create a back garden haven for an urban house. The brief was to inspire city dwellers, demonstrating what can be achieved in a small urban location and to create a sense of tranquillity and escape.

The Prince’s Foundation sets clear guidelines based on organic and sustainable principles and the young gardeners were also tasked to pay particular attention to the use of local, natural materials and sustainable drainage systems.

Lead designer Amanda Jayne Pearce, a mature Horticulture BSc (hons) student from Moreton-in-Marsh, described the Pershore garden entitled Winner’s Circle: “This modern, sustainable, urban garden provides a small oasis away from the hustle and bustle of city life.  The microclimate provided by the urban environment allows for a planting scheme that is drought tolerant, requires minimal maintenance, yet allows for a more unusual tropical planting scheme.

“We have encouraged nature through the placement of wildlife byways allowing for the movement of hedgehogs, alongside a green roof pergola to attract insects and provide a pleasant outlook across the garden.

“The centre of the garden sees a sandstone winners circle with a bespoke fire pit telling of a day at the races. Planting shapes represent the rosettes presented to horses on race day, while equisetum is planted in the rain garden and helps with soil erosion.”

After months of preparation, the horticulture students had just six days to build and plant their garden at the world-famous racecourse in readiness for the annual Spring Garden Show which opened on 13 April. The garden stayed on display throughout the show and visitors voted for the People’s Choice Award, which was announced on the last day of the show.

After receiving their gold medal, co-designer Joshua Reid, a 19-year old Level 2 Horticulture student from Upton Snodsbury, said: “When we heard that Pershore had been awarded a gold medal we were all incredibly excited. Getting a gold means everything to me as it’s the first ever garden design competition that I have taken part in. As well as jointly designing the garden with Amanda, I also contributed lots of labour towards its construction. It was hard work but well worth the effort!”

Lecturer Lynn Brotherton said: “The Young Gardener of the Year competition represents a brilliant opportunity for students to be involved in a show garden from design to completion. This year we have involved Level 2, Level 3 and BSc Horticulture students, which provided students with a unique opportunity to pass on their knowledge to those studying at different levels and to collaborate with students they might not have the chance to work with otherwise.

“We are all immensely proud of everyone who worked so well as part of a team. The days were long, arduous and cold! The end result was reflected in the well deserved gold medal. A great achievement for all the students who have been excellent ambassadors for their college.”

Simon Sadinsky, Deputy Executive Director (Education) at The Prince’s Foundation said:  “I will be looking for gardens that are bold and inventive, that surprise me with their thought and creativity. I will be particularly interested in ways that the gardens make the most of their space and are designed to be compatible with their setting and local habitat.”

Alastair Warwick, Chief Operating Officer at Ascot Racecourse, added: “We are delighted that the Young Gardeners of the Year Competition is at Ascot Racecourse to form part of the inaugural Ascot Spring Garden Show. Supporting young and emerging talent, in both sport and horticulture, is hugely important to Ascot so we’re excited to be giving these students a platform to showcase their skills and creativity.”

David Domoney, organiser of the competition said: “During this competition I have the privileged position of working side by side with the colleges. I get to experience the competition and support the students through every stage, from initial planning to the grand reveal, so I know just how much passion and hard work goes into these show gardens.

“The tutors are great instructors and extremely positive role models and it’s an absolute joy to see the students’ creative plans flourish each year and to witness the team’s pride and sense of achievement at the finished result.

“It is also innovative to see how the colleges have incorporated a touch of the equestrian into their garden design as a subtle reflection on the venue. This competition is a fantastic career platform and I hope these budding young garden designers and landscapers build upon it to become our stars of the future.”

Pershore College offers a wide range of horticulture courses including apprenticeships, full and part-time courses and degrees. For more information, go to www.wcg.ac.uk or call 0300 456 0049.