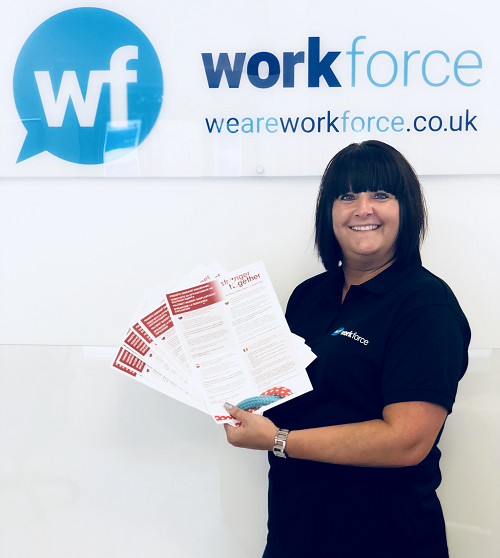 The scourge of modern slavery is being tackled head on by a leading Worcestershire recruitment provider.

Workforce Staffing, which has county branches in Redditch, Worcester and Kidderminster, has become an official partner of national Government-backed initiative Stronger Together, which was set up to stamp out exploitation of workers and human trafficking.

The team from Workforce are trained to ask the right questions at interview stage and spot the signs that a candidate may have been brought to the UK and exploited by ruthless gang masters.

Trudy Harding, Workforce Staffing Branch Operations Director, said: “Modern day slavery is a strain on the conscience of the nation and has no place in Britain.

“People are being lured here with the promise of a better life and then denied the basic rights of workers and citizens, such as the minimum wage.

“At Workforce Staffing we conduct full face to face interviews at registration and we will only work with employers who are as committed as we are to ensuring gang masters cannot profit from their crime. We have worked with Stronger Together for the past two years and have stepped up our commitment by becoming a Partner in this business-led initiative.

“We will not stand for any modern slavery behaviours or acts and will continue to work closely with the police to report anything which is suspicious.”

Gang masters are known to exploit workers, often migrants, by setting up and then controlling their bank accounts, syphoning off money they are owed for work.

Workforce staff across all eight branches in Worcestershire, Birmingham, Solihull, Coventry and the Black Country, have been trained to spot the signs of exploited workers, including those who wear the same clothes day in and day out, those who change address and bank accounts regularly or those with such poor English they are vulnerable to being duped.

Workforce Staffing employs over 100 people. The business was launched in 2003 by Worcestershire brothers Paul and Joe Alekna. Paul is now the group’s CEO, with Joe as managing director.