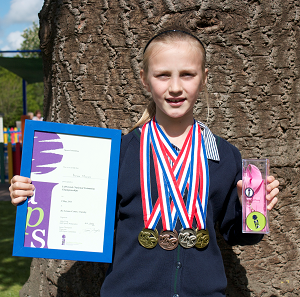 RGS The Grange pupil and current Worcester Swimming Club champion, Aimee Monks took part in the IAPS (Independent Association of Prep Schools) National Swim Finals, at the K2 Arena in Crawley. Aimee, who has been swimming since she was four, came first in the 25 metre butterfly heats earning her a place in the final in which she achieved a bronze medal.

On Sunday she competed at the Haden Hill Annual Open where she won two gold medals (200 metre individual medley and 50 metre butterfly), one silver (50 metre back stroke) and a bronze (50 metre freestyle).

Mr Bousfield, Assistant Head Co-curricular and Director of Sport said, “I know how much effort Amy puts in to her swimming and getting this recognition is a great reward.”

Aimee trains five times a week for a total of seven hours. Her ambition is to be an Olympic Champion, and judging on this last weekend’s medal haul, she is on target.