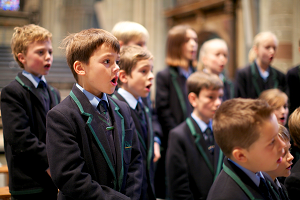 RGS The Grange pupils have been celebrating success. Will Hulbert, Year Four, recently became the recipient of The Young Performer of The Year award in the Worcester Festival.

Will performed the poem “The Pet” by Tony Bradman. He was invited to attend the Worcester Concert Performance last week and was announced as the winner of the Kimberley Cup as a result of his previous performance.

Will, when asked about the success, said, “I felt shocked, amazed and bewildered all at the same time when I heard my name called out. My mum was with me and she kept hugging me!”.

From the performing stage to the sporting stage, The U10 Worcester Hockey Club girls went to Beeston, Nottingham to compete in the Midlands Regional Hockey Tournament. They came away victorious winning the final 1-0.

All but three of the girls are pupils of RGS The Grange and are coached by James Gerrish, RGS sports teacher.  They are Eva Barry (GK), Lara Shaw, Ellie Nicholls, Katie Ralph, Alice Atkinson, Imogen Monce and Annabel White.

Good luck to Katie Kimberlee as she gets ready to travel to Bucharest, Romania for the Dance World Cup. The event takes place from 27 June to July with 18,000 competitors from 38 countries. Katie is travelling with The Harlequin Stage School and she is immensely looking forward to the competition.

Katie has been dancing since the age of two and enjoys ballet, modern, jazz and tap. She rehearses and attends lessons up to four times every week. When quizzed on her love of dancing Katie said, “I find dancing very relaxing, it is fun and I enjoy it.  Some moves are hard and my teachers are perfectionists but that makes me work harder.” Good luck to Katie and all the dancers travelling with her from her dance school.

Congratulations to the RGS The Grange Chamber Choir who sang beautifully at the Cheltenham Competitive Arts Festival on Tuesday afternoon. The children delivered two songs, ‘A Pirate for a Day’ and the moving  ‘Afternoon on a Hill’. The children were thrilled to be announced the winners for the third year running.

Mr Hughes, headmaster at RGS The Grange, said, “We place great emphasis on developing a rich and diverse co-curricular programme, enabling children to thrive in an environment in which all of their abilities and talents are recognised and nurtured”.