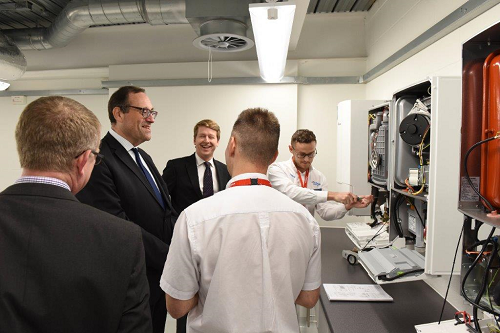 Following a £3.5 million redevelopment programme, the company’s flagship training academy was officially reopened by Robin and Minister for Energy and Industry Richard Harrington. The new facility will see Worcester Bosch offer an even wider industry-leading training provision to a greater number of installers.

The upgraded academy is four times the size of the pre-existing facility, with over 2,000 square meters of practical training areas and classrooms – an area equivalent to 10 tennis courts. There are over 200 working boilers and heating appliances across the academy’s nine practical rooms, which are expected to enable Worcester to welcome as many as 10,000 heating engineers to its headquarters each year.

Robin Walker and Richard Harrington met with Worcester Bosch CEO Carl Arntzen and received a tour of the manufacturing site before cutting the ribbon on the new academy and meeting apprentices. As the Prime Minister’s former Apprenticeships Advisor, Richard Harrington was delighted to hear from local apprentices about their training and skills development at the academy.

There was also an opportunity for the two Ministers to visit the Worcester Bosch Research and Development Department and hear more about the company’s plans to develop hydrogen-powered boilers.

“The unveiling of our new, flagship Training Academy is a real landmark for Worcester having been the result of the largest single investment in training in the company’s history. As demand for professional development among installers grows, we want to ensure we continue to offer some of the industry’s best training courses, at facilities engineers really enjoy using.”

“I was delighted to welcome Energy Minister Richard Harrington to Worcester’s new training academy. The facilities are world-class and it is great to have a local business investing in providing such high-quality training, with capacity for up to 10,000 engineers a year to receive training in the city.”

“Richard and I very much enjoyed the opportunity to speak with Worcester Bosch’s apprentices and hear about their experiences, the skills they had developed at the academy and their plans for the future.”

“The insight into the innovative research going into hydrogen boiler technology was fascinating and will be invaluable in contributing to the Government’s aim of decarbonising the economy.”