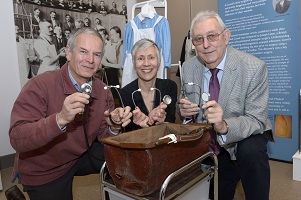 The Wyre Forest law firm that supports Kidderminster’s celebrated family of surgeons, the Strettons, has sponsored a week of science activities for local children.

The recent Science Week at Kidderminster Museum of Carpet, backed by Birmingham Road-based mfg Solicitors, came as the venue also launched a six-month exhibition on the Stretton family where youngsters can learn about how it produced three generations of surgeons who were the driving force behind the founding of Kidderminster Hospital.

Samuel, Lionel and John Stretton all made major contributions to medical life in the town between 1856 and 1952.

The trio all held the position of ‘honourary surgeon’ in Kidderminster with Samuel working alongside Florence Nightingale during the Crimean War. Grandfather Lionel also discovered a now standard world-wide medical procedure when in the early 1900s he found that mixing iodine with water sterilised the skin which allowed medical procedures to take place.

Jim Quinn, consultant solicitor at mfg Solicitors, is acting as executor following the 2010 death of Antony Stretton, who was disabled after a stroke at the age of nine and did not follow his father John into medicine. Instead, he became a successful businessman.

Mr Quinn said: “As a firm with many links in Kidderminster, everyone at mfg Solicitors was thrilled to sponsor Science Week and for many local children to be able to enjoy and explore the displays.

“The museum also has an exhibition celebrating a century of surgeons who have done a great deal for the people of Kidderminster and who continue to inspire generations of young people to consider a career in the sciences and medicine.

“It is an excellent opportunity for children to learn more about science in general as well as the amazing history of the Strettons.”

It is hoped around 800 children will visit the Stretton exhibition – launched by Chris Stretton, nephew of Antony. It includes hands on exhibits such as stethoscopes that children can pick up and play with as well as numerous audio anecdotes on the Strettons.

Youngsters can also dress up in doctors’ and nurses’ outfits, use bandages and experience what it is like on an operating table. There are education packs and special sessions focussing on how bacteria is transferred and how to prevent the spread of germs.

The Stretton exhibition runs until 11 July at Kidderminster Museum of Carpet in Green Street.

A book, by historian Nigel Gilbert, which celebrates the history and medical achievements of the Strettons was launched in October 2012.