The General Election in Worcester begins at RGS Worcester 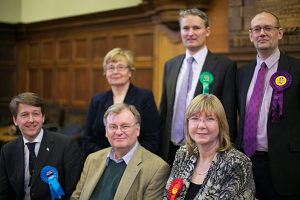 Candidates from the five major Parliamentary parties answered questions posed by RGS Worcester students in a unique debate at the School yesterday, which kicked off the 2015 election season in Worcester.

Robin Walker MP represented the Conservative Party, Joy Squires spoke for the Labour Party, Liz Smith represented the Liberal Democrats, Louis Stephen the Green Party and James Goad UKIP. The theme of the debate was ‘Why should you vote?’ Each of the delegates outlined their reasons why we should vote. Robin Walker said that Worcester is a marginal seat and every vote counts, whilst Louise Stephen urged voters to create a society that is fair to everyone by voting to change politics.

Sixth Form politics students asked, ‘How can young people tell the difference between lies and promises that can be fulfilled?’ and ‘Is the monarchy an out-dated institution?’

Mrs Lucy Kent, Head of Politics at RGS Worcester said, ‘The debate last night was a fantastic opportunity for our students to engage with real politics and learn more about the personalities involved in the local campaign. We are very grateful to the candidates for enabling our students to be engaged in the political system in this exciting way.’

Robin Walker MP commented that he had really enjoyed the evening and RGS Worcester looks forward to the second debate, which will take place nearer to the election.

The candidates are debating every Monday night at the Cap and Gown pub, Upper Tything, Worcester.