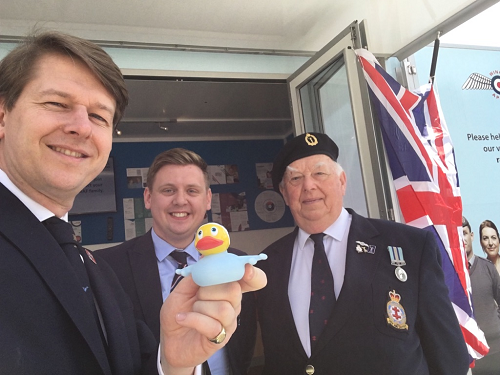 Worcester MP Robin Walker joined with over 350 veterans, cadets and city dignitaries on Sunday (20th May) to honour the 100 year anniversary of the Royal Air Force.

The celebrations, organised by local RAF Association chairman John Mason, formed part of a number of events happening nationwide in 2018 following the official centenary on 1st April, reflecting on the history and achievements of the RAF and celebrating the work the Air Force is currently doing as well as looking forward to the next 100 years.

Worcester has long had a close connection with the Air Force, with Perdiswell Park having been the site of RAF Worcester, a landing ground and flight training facility between 1940 and 1945. The county also played a vital role in winning the air war – with the radar system which helped the RAF to victory in the Battle of Britain having been invented in nearby Malvern. More recently, the city’s 187 (City of Worcester) Air Cadet unit has gone from strength to strength, and last year won the prestigious Lees Trophy coming top out of 970 air cadet squadrons from across the country.

The Worcester parade began in the Cornmarket before making its way down the High Street to the Cathedral, where a special service took place commemorating those who have served in the RAF since it was formed in 1918, shortly before the end of the First World War. Robin attended the parade and service, which was led by Dean of Worcester Revd Dr Peter Atkinson, alongside Deputy Mayor of Worcester Allah Ditta, Vice Lord Lieutenant Lady Morrison, and Air Marshal Julian Young.

Also planned to coincide with the RAF Centenary celebrations, staff at Warndon Library at the Fairfield Centre are putting together a project uncovering the lives of First World War RAF personnel buried in local cemeteries. The Remember RAF 100 project is a collaboration with 13th Worcester Scouts, and the research is soon to form an exhibition of photographs, documents and other findings at both Warndon Library and the Hive over the summer. This week, those working on the project visited Astwood Cemetery to find the graves of some of those veterans featured in the research and to clean them and hold a short commemoration service.

Speaking after the parade on Sunday, Robin said:

“This was a wonderful celebration of 100 years of excellence and innovation in our RAF, and it was a privilege to be there alongside hundreds of cadets, servicemen and women and veterans spanning many generations. Having completed the Armed Forces Parliamentary Scheme with the RAF, I’ve seen first-hand the world-class technical, engineering and training expertise that the Air Force offers and I was glad to have an opportunity to celebrate that on Sunday.”

“The parade was fantastic to see, with the High Street lined with spectators, and the service was a truly moving commemoration of those who have given their lives defending their country in the service of the Royal Air Force. Importantly, the service celebrated not only the well-known achievements of the Dambusters and the Battle of Britain, but also all of those whose work has perhaps been less visible but no less vital to the RAF’s illustrious history. Worcester Cathedral served as a fitting venue for such an occasion, with its numerous windows commemorating local lives lost in the RAF.”

“The forthcoming exhibition organised by staff at Warndon library and 13th Worcester Scout group will continue the centenary celebrations, and I look forward to visiting and seeing the hard work and research that has gone into the project. It is essential that we remember those who made the ultimate sacrifice so that we could enjoy peace and security, and projects such as this are essential for ensuring their legacy is preserved and commemorated.”