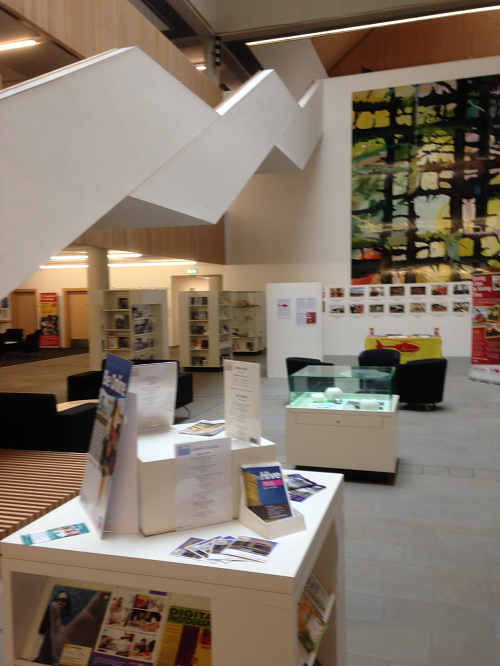 To celebrate National Libraries Day, Robin visited Worcester’s Hive last Saturday as well as St John’s Community Library and met adults and children who enjoy the wonderful facilities and benefit from the exciting and innovative projects that the Libraries in Worcester are running.

National Libraries Day highlights and celebrates the importance of public libraries and what they bring to our communities.  The Hive in Worcester is the first joint public and university library and Robin has been a long standing supporter of its place as the hub of Worcester’s community.

Robin attended a storytelling session at the Hive in which young children were enthralled by a live reading of children’s book the Library Lion and then meet with the Hive’s very own book doctor who can prescribe suitable books for readers, young and old alike. As well as speaking to Library staff he meet with a number of happy customers who said how much they value Worcester’s world class library facilities.

Last year, more than 3000 public libraries in England lent almost 200 million books and received well over 200 million visits.  Libraries remain safe, trusted places where people can go: not just to borrow books but to get access to a whole range of services including adult learning and evening courses, as well as poetry readings and spoken word mash ups.

According to statistics from The Chartered Institute of Library and Information Professionals (CILIP) – which organised the day along with the Society of Chief Librarians, the School Library Association and The Reading Agency – this year’s National Libraries Day saw 857 events celebrating the British public library network, which is up from 720 events last year. Libraries and supporters used the hashtags #LibrariesDay and #NationalLibrariesDay, which trended throughout the day.

Robin’s visit was shortly after The Hive ran a Harry Potter Book Night when 55 children and 35 adults; dressed as their favourite Hogwarts characters, came together to enjoy a host of activities; just one example of the educational and fun programmes that the Hive runs to capture the imaginations of Worcester’s school children.

As the Minister of State for Culture, Media and Sport pointed out in a recent piece on Conservative Home, the vast majority of Libraries that have closed over the last few years have been shut down by Labour councils – 79 in all, compared to just 11 closed by Conservative councils. Worcestershire’s Conservative led County Council has not closed any Libraries but instead has found innovative ways in which to partner, hosting the joint University, City and County library at the Hive and bringing together a childrens’ centre and community education activities alongside the Library at the Fairfield Centre.

Only last month the University of Worcester secure a VAT refund following a long running campaign by the MP that reflected the benefits of  the shared services approach they have taken, working with Worcestershire County and Worcester City Council to share library facilities and make more available to the public in Worcester for free. This decision will hopefully pave the way for more such shared facilities to follow Worcester’s example.

“It was really good to see the events being held across our 21 libraries here in Worcestershire for National Libraries Day. Worcestershire Library buildings are much more than Libraries, they are community hubs, where people can meet, learn and chat as well as acquire new skills. Across the county 7 of our libraries are community run, 2 have moved to new premises, as well as one just about to opened in a school and another is due to be built into a Medical Centre and no library has been closed.”

“I am grateful to Worcestershire’s wonderful public libraries including the Hive for their important work and Saturday was a fantastic opportunity to meet some of the families and children who are inspired by their facilities and excellent events. Libraries needn’t be old fashioned as they are so often portrayed but can be vibrant community hubs which combine the latest technologies with a sense of fun. The Hive is a brilliant demonstration of this but so are our cities smaller libraries in Warndon and St John’s.”

“Only last week, the Minister for Schools gave a keynote speech on how reading and storytelling stretches children’s vocabularies, expands their horizons and extends their ability to learn. It is absolutely the case that regular reading opens minds and expands horizons and this is just one of the many reasons we should cherish our libraries. The public readings of “rat a tat tales in the Hive are a wonderful opportunity to introduce young children to the joys of reading.”

“Library staff at each of the libraries I visited raised concerns with me over public funding for Library services, which I took up with Ministers. I am hopeful that yesterday’s announcement from the Communities Minister of an additional £5 million of transitional funding for Worcestershire’s county council, plus a fairer funding formula in the future should help to ease some of the pressure on such vital public resources. Unlike Labour Councils across the country which have cut library services, the Conservative led County Council in Worcestershire want to protect our cultural institutions like The Hive and the improved community libraries in St John’s and ensure they remain part of a public library service which is enjoyed by many Worcester residents. I certainly saw on National Libraries day how valuable and inspiring our local libraries can be.”