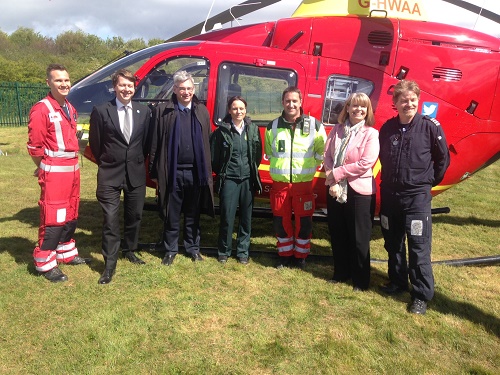 Worcester’s MP Robin Walker recently dropped by Strensham Airbase to pay a visit to the Midlands Air Ambulance Charity and meet the dedicated volunteers, pilots and controllers who keep it in operation. This week in Worcester the Air Ambulance has been deployed to an incident in Tunnel Hill, a timely reminder of how important its quick response can be.

The Midlands Air Ambulance region is the largest in the country and serves a population of over 6 million. The charity is one of the longest established in the UK and averages 2000 missions a year. As part of the commitment to patient care, the charities flying times run from 7am till 9pm throughout the year.

Each Air Ambulance mission costs £2,500 and over £7 million is needed each year to keep the three air ambulances in the air. The charity receives no funding from the Government or National Lottery so relies entirely on the support and generosity of local people and businesses. Robin supported the campaign to free air ambulances of VAT which succeeded in the last Parliament and has taken up concerns on behalf of the Midlands Air Ambulance with Worcestershire hospitals.

Robin, who is PPS to Education Secretary Nicky Morgan, was particularly impressed by the launch of the charity’s education programme designed to give young people a look into the work of the charity and has been produced in line with the national curriculum. Schools across the region are being invited to take part in the scheme as part of outdoor learning exercises.

He discussed with the paramedics and pilots some of the challenges of getting patients who need care swiftly into the acute hospitals that serve them and possible plans to upgrade the helipad at the Worcestershire Royal Hospital, which he will be supporting.

“I was delighted to have had the opportunity to meet with the hard-working people at the Midlands Air Ambulance Charity. It was great to hear of the lightning response times they are able to achieve and the high level of training that their pilots and paramedics undergo. We all owe a debt of gratitude to this wonderful charitable organisation as their readiness helps to keep us all just a little bit safer. In large rural Counties such as Worcestershire the ability to respond fast even in remote areas is vital. The recent call out in the heart of Worcester is a reminder that they are always on call even here in the city.”

“21% of all cases handled by the Midlands Air Ambulance take place in Herefordshire & Worcestershire, and with 90% of the region accessible by air in 8 minutes or less, the charity is a vital part of emergency healthcare across the West Midlands. I commend the lifesaving work of the team and its vital importance to our community. As they celebrate their 25th anniversary this year, their motto of saving lives by saving time is one that we should all support.”