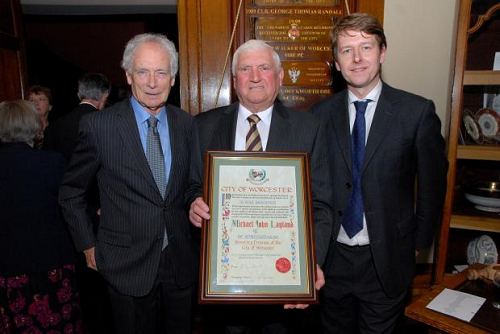 Worcester MP Robin Walker has paid tribute to twice Mayor of Worcester and Freeman of the City Mike Layland, who tragically died today at the age of 81.

The former Worcester City Councillor who served as Mayor on two occasions 30 years apart had been a giant figure in local public life for over four decades, contributing enormous amounts of time to serving the community in Warndon and Nunnery ward through his council and charity work. Even after he left the Council in 2013, he continued to be highly active supporting his neighbours.

In 2014, Robin attended a ceremony at the Guildhall granting Mr Layland the Freedom of Worcester in recognition of his years of public service. A plaque was unveiled in Mr Layland’s honour, putting him alongside Cecil Duckworth DL CBE and Robin’s father, Lord Walker of Worcester.

Most recently Mike Layland served as chair of the Worcester Cemeteries and Crematorium Forum, championing the investment and restoration carried out at Astwood Cemetery’s crematorium.

“This is a terribly sad day for Worcester – the city has lost one of our most dedicated and loyal sons.”

“Mike was a true giant of politics in Worcester, serving the community as a councillor for an incredible 44 years. He was also Mayor of the city twice – firstly in 1982, when my father was Member of Parliament for the city, and secondly in 2012 when I worked closely with him as the local MP.”

“Starting as a Labour man and then continuing as a fierce independent, Mike always spoke up passionately for the people he represented. There were many issues on which we disagreed, always politely and with reasoned argument, but there were many more on which we agreed.

“Mike was a figure that transcended party politics, and acted as an inspiration and a mentor to a great many people in Worcester politics. He will be sorely missed and fondly remembered by friends from across the political spectrum and beyond it.”