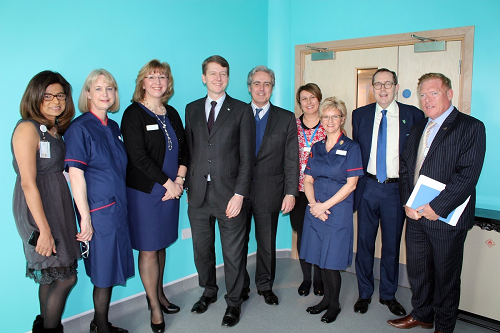 Worcester’s prospective Parliamentary candidate has welcomed the news that the Meadow Birth Centre at Worcestershire Royal Hospital has been recognised as national Birth Centre of the Year at the MaMa Awards 2017 last Friday.

The Awards are part of the annual MaMa conference, now its seventh consecutive year, and recognise outstanding health care environments or midwifery staff in ten different categories through entries from across the UK.

Robin visited the initial site in December 2014 as part of a visit to the hospital and was invited back to see the completed centre in March 2015 with fellow Worcestershire MPs. The centre offers a comfortable environment where birth is treated as a ‘normal’ process rather than a clinical one. The four-room centre is in close proximity to the delivery suite but not a part of it and has seen over 1,500 babies born since opening two years ago.

“I am absolutely delighted to hear that the hard work of the staff at the Meadow Birth Centre has been recognised. I was previously invited along to visit the centre along a number other then county MPs and I was personally blown away at professionalism of the staff and of the stunning suites at the centre.”

“After two years and over 1,500 children born, there is clearly evidence that a non-clinical approach to childbirth is, in many cases, less stressful and it is fantastic that we have this facility available in Worcester. It is fantastic news for Worcester midwives and our local NHS midwife-led Birth Centre. Well done to the whole team.”

“In addition to the Birth Centre, our hospital has seen a number of major upgrades in recent years including the new Oncology Centre, the Breast Unit and more recently a further expansion of funding to support the A&E unit and I will continue to support such innovation any way I can.”