Watch the latest TEDxMalvern talks on ‘Positive Progress and Optimism’ 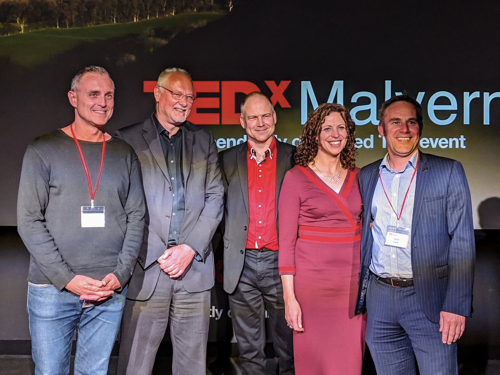 People around the world now have the chance to hear from inspiring local thought leaders through a series of free videos filmed at a recent TEDxMalvern event.

The evening, which was held at the Coach House Theatre on 24 April, featured a line-up of fantastic live speakers, screenings of informative TED Talks and offered a chance for guests to network and discuss ideas.

With the theme ‘Positive Progress and Optimism’, the talks were presented to an audience of about 100 people and covered such topics as relationships, physics and astronomy and mental health and well-being.

The live speakers were Cathy Garner, a Relationship Coach and Portrait Artist, Cliff Jones, a Professor at the School of Physics and Astronomy at the University of Leeds, and Damian Mark Smyth, an International Consultant, Speaker and Best-selling Author.

TED is a nonprofit organisation devoted to ‘ideas worth spreading’, usually in the form of short, powerful talks (18 minutes or less) delivered by today’s leading thinkers and doers.

TEDx is a programme of local, self-organised events that bring people together to share a TED-like experience. At a TEDx event, TED Talks video and live speakers combine to spark deep discussion and connection.

Dr Adrian Burden, Lead Organiser for the event, said: “This was our third TEDx event in Great Malvern. The evening provided an opportunity to discuss topics that both resonate with our local community and should interest a global audience.”

Simon Smith, Co-organiser of TEDxMalvern and Economic Development Manager at MHDC, said: “Once again, the event was a great opportunity for innovative minds to come together to share ideas and discuss thoughts on the positive progress of not only technology but of health and well-being. As part of our five year plan to make Malvern a centre of innovation, the event was aimed at helping to build upon the town’s unique heritage as a centre for technology development and creative thinking.”

Visit www.ted.com/tedx/events/32934 for more information and to watch the talks.