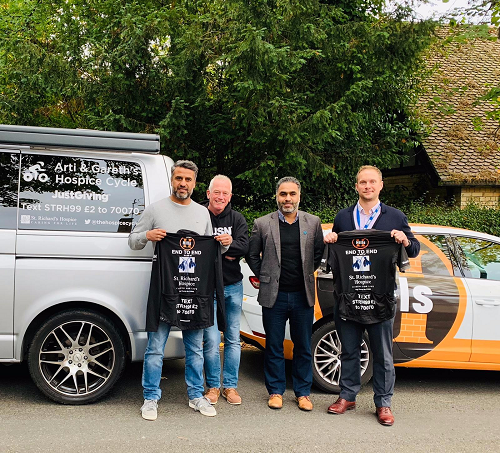 Gareth Andrew and Arti Fiaz raised over £15,000 for the hospice, which specialises in palliative and end of life care for adults in Worcestershire affected by a life-limiting illness.

The ambitious pair set off on Wednesday 19th September 2018, and throughout their journey gained sponsorship from Hill’s Estate Agents, a local business owned by Arti’s brother, Azmat.

The pair covered over 1,000 miles as they cycled from the most northern point of Scotland at John o Groats, to the south-westerly tip of England at Lands’ End, with a target completion date of Friday 28th September 2018.

On discussing his motivation for completing the challenge, Gareth said: “I unfortunately lost both parents in 2016 over a short 6-month period. I’m still dealing with the huge hole this left and I knew I had to do something to help others.”

“My own personal experience has shown me just how important the care that St Richards Hospice provides, both for end of life and their ongoing support for the families and loved ones as they go through a hugely traumatic time.”

The two men share a passion for cricket and are regulars at Ombersley Cricket Club. They decided on the challenge after a discussion about challenges they have yet face and decided on the 1000+ mile cycle despite neither being avid cyclists.

The duo both praised that Frank was an important role in making sure they were safe, well looked after and motivated throughout their journey.

Arti said, “I’m not ashamed to admit I have a personal interest. As someone from a minority background, I’m keen to raise awareness within the Asian community of the tremendous support and assistance the Hospice provides for service users requiring end of life care.

“Culturally, the responsibility has fallen on immediate family to nurse their loved ones during this difficult time but there is an alternative environment that can help make this period easier for all involved.

Although the challenge has been completed, supporters can still donate through Gareth and Arti’s Just Giving page at: https://www.justgiving.com/fundraising/thejoglebrothers