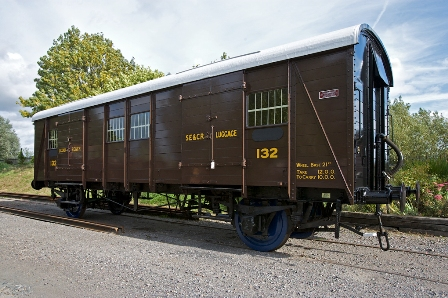 Join the Worcestershire World War One Hundred team aboard the Cavell Van on the Severn Valley Railway on Thursday 14 June for a unique opportunity to see the carriage that brought Edith Cavell and later the Unknown Warrior back to England after the First World War.

On loan from the Kent and East Sussex Railway, experience a ride on a steam train, a tour of the Cavell Van, a visit to Highley Engine House and Museum as well as talks on the First World War and the Cavell legacy.

In 1919, the Cavell Van was used to bring back the body of nurse Edith Cavell from Belgium where she had helped 200 Prisoners of War escape, before she was caught and executed.  The following year, the same wagon transported the body of the ‘Unknown Warrior’ prior to a funeral at Westminster Abbey, representing the many who died without being identified.

Dr Fiona Reid from Newman University will talk on Edith Cavell herself; Dr Adrian Gregson will speak about the Severn Valley Pioneers; and Sarah Ganderton will talk about Worcestershire’s Wounded and the impact the War had on health and wellbeing. Gillian Roberts will also provide an overview to the Worcestershire World War One Hundred programme and the ways in which people can still get involved up until Armistice.

Adrian Gregson, Worcestershire World War One Hundred Project Manager said: “We are delighted to have worked with the Severn Valley Railway Trust Kent and East Sussex Railway and the Cavell Trust to bring the Cavell Van to Worcestershire. We hope people join us on what we expect to be a very special day out as we commemorate the work of Edith Cavell and the sacrifice of the Unknown Soldier.”

Cost per person: £25 (including buffet lunch) – £20 with concessions https://e-services.Worcestershire.gov.uk/LibraryEvents/EventDetails.aspx?id=494